Shown: Kirby Chambliss, performing a "knife edge" maneuver in his Edge 540 in Perth, Western Australia during the final leg of the 2006 series. Credit: Myself (Hamish) [CC BY 2.0 (https://creativecommons.org/licenses/by/2.0)], via Wikimedia Commons. 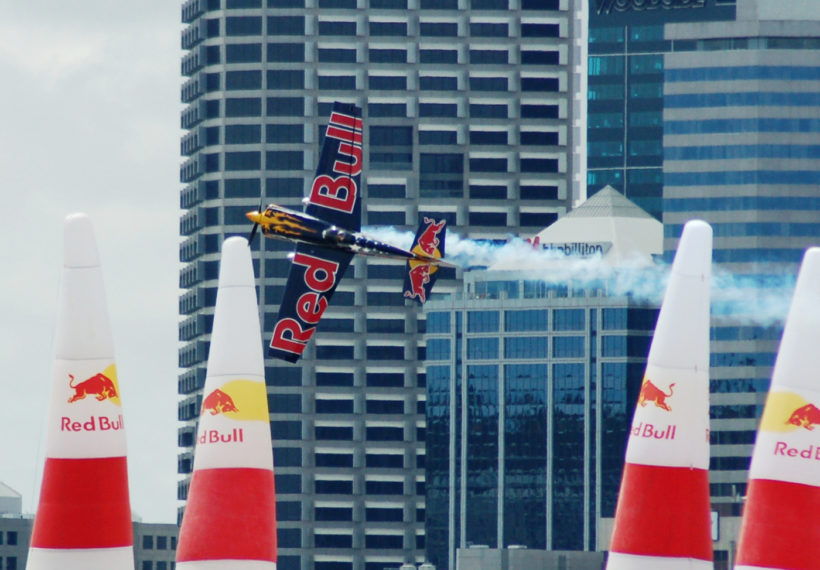 What do you get when you mix airplanes, extreme sports, and daredevils? Probably something similar to Red Bull Air Racing. On this episode of Playing with Science, hosts Gary O’Reilly and Chuck Nice strap in and take flight to the extreme as we venture into the world of the Red Bull Air Race alongside adventure journalist, and frequent StarTalk guest, Jim Clash, Technical Director for Red Bull Air Race Jim “Jimbo” Reed, and Red Bull Air Race pilot and 2x World Champion Kirby Chambliss. First things first, we get a lesson in speed – airspeed that is. You’ll hear about Jim Clash’s four supersonic flights and what it felt like to speed through the atmosphere. Get some history on the Concorde Aircraft as Gary tells us a tale of British espionage. Discover more about hitting the speed of sound close to the ground and high in the sky. Jim Clash also tells us how time slows down when you’re approaching the pylons in a Red Bull Racing aircraft. Next, we go behind-the-scenes of Red Bull Air Racing as we explore the difference between the Master Class and Challenger Class. You’ll learn about the course designing process and what Jimbo Reed and his team value when dreaming up layouts. You’ll hear about Jimbo’s time as a team engineer and all the ways he would try and cheat. He also explains how he tries to monitor cheating now that he’s the one making the rules. Find out why Jimbo thinks the deciding factor in races comes down to the psychology of the pilot. Discover more about the construction of a race plane compared to a commercial aircraft. You’ll also learn how an automated system and human judges share responsibility in scoring pilots during their runs. We discuss how each course is a living, breathing mechanism, capable of change at any moment. Lastly, Kirby Chambliss explains how he transitioned from commercial flying to aerobatics and “three-dimensional flight.” Kirby shares why he doesn’t look at his instruments during a run and if there is strategy involved in each race. You’ll also find out if he has an intuitive sense of the aircraft when racing. All that, plus, Kirby tells us why those of us who have never seen a race before should watch one. Ready to earn your wings?